Crumbling mews property is on the market for £2.5m Crumbling mews property is on the market for £2.5m - but could fetch £4m when fully restored

Even the estate agents warn that the roof is so leaky the house has gutters inside and out, but it could be a brilliant investment for one brave soul.

The crumbling shell of a one-bedroom Little Venice mews house has gone on sale for more than five times the price of the average London home.

Despite its eye-watering £2.5million price tag, the "beautifully derelict" property has a roof so leaky that buyers could be "taking an umbrella to bed". Read More The pound is falling sharply after the UK election delivered a hung parliament.

The pound bounced above $1.30 in mid-May when Prime Minister Theresa May’s call for a snap election was expected to boost her... Read more The Bank of England has announced a quarter percentage point cut in the benchmark interest rate to a record low of 0.25%—the first such move in over seven years. Read More In 1998, 22 per cent of those under-35 on modest incomes were renting, a figure that has now risen to 53 per cent. Nine out of 10 Britons on modest incomes under the age of 35 won’t ever be able to afford homes within a decade, according to a study by a leading thinktank. Read More Exclusive: it houses the study from which she called Ronald Reagan, and has a bomb-proof door. Margaret Thatcher’s former Belgravia mansion goes on sale. Read More

All change in Bayswater:Zone 1 area tipped for house price growth in 2020 as regeneration gathers pace The clean-up of Bayswater is already clear. The first homes at the former Whiteleys shopping centre go on sale this year while new shops are set to smarten up neighbouring Queensway.
Its shops may lack excitement but its Zone 1 location is brilliant, its unconverted townhouses are elegant and, most importantly, regeneration is gathering pace.You can walk to the West End or hop on the Central line at Queensway station or the District and Circle from Bayswater.
From 2021 a short walk to Paddington will be rewarded by Crossrail services direct to the City or Canary Wharf.
“With its neighbour Notting Hill to the west and Marylebone to the east, where values can easily exceed £3,000 per square foot, Bayswater has long been the forgotten area of prime central London,” says buying agent Caspar Harvard-Walls, partner at Black Brick.
The reason for Bayswater’s Cinderella status? “Bayswater is blighted by Queensway, which is dominated by fast-food takeaways and mobile phone shops.” 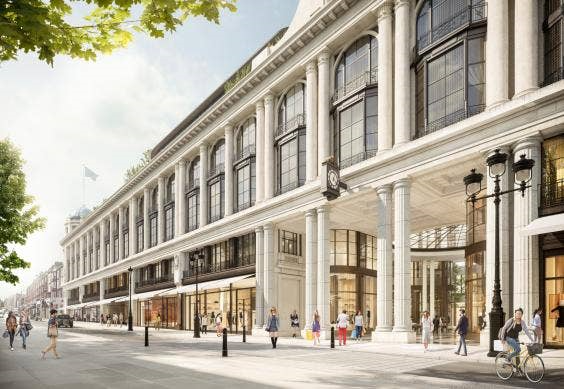 Whiteleys shopping centre is being redesigned with new shops and restaurants, along with luxury new homes

Why Bayswater is tipped as one to watch in 2020

The clean-up of Bayswater is already clear. The first homes at the landmark Grade II-listed former Whiteleys shopping centre, which closed in 2018, go on sale this year.
Prices are still to be confirmed and if you need to ask, you probably can’t afford one.
There will also be shops and restaurants at the redesigned centre, rebooted by starchitect Norman Foster. Meanwhile, a cluster of smaller developments on and around Queensway will have more flats, shops and offices that will generally smarten up the street.
The pros: Bayswater is relatively underpriced for its prime location, and Crossrail and regeneration will produce price growth.
“We know the effect that improving the public realm has on property values,” says Harvard-Walls. “The redevelopment of Marylebone High Street, Mount Street in Mayfair and Sloane Square in Chelsea have led to surges in the price per square foot in those areas. We expect 2020 to be the year the wider market really starts to sit up and take notice of Bayswater.”
The cons: it is good value for prime London, but it’s still not cheap. And there are still too many shabby two-star hotels.

Average house prices in Bayswater — and what there is to buy

An average home in W2 costs £1.25 million, according to Rightmove. Unlike other prime districts, where prices have flopped 20 per cent in the past two years, values are up slightly, from £1.2 million five years ago.
White stucco townhouses, often divided into flats, could again become the area’s loveliest homes, priced at £1,500 to £1,600 per square foot for a modernised property.
Prices for newer purpose-built flats are considerably more affordable at about £1,000 per square foot. In these uncertain times, one thing is certain: the need for companies across every industry to rethink how they function.
It’s safe to say that every industry is being challenged to quickly adapt to this new world.

Over the past few months, we have seen how digital technology helps in the fight against COVID-19 (coronavirus).
Whether its collecting data on digital platforms, to provide timely information and advice about COVID-19, or helping and supporting workers working from home and students continuing their education, the digital world has become part of our lives more than ever before.

Many had to adapt to the rapid new changes and challenges coming with this pandemic, including the housing industry.

Communities rally together to support each other during Coronavirus outbreak, and that counts for online services as well.
With the health and safety of our team and customers as our top priority and to ensure you are still able to view a place that you can call home.

We at Canary properties have adapted a new modern way of for viewings. Virtual tours provides a complete immersive 3D virtual experience for the viewer.
This means quality viewings from the comfort of your own home.

We can proudly say that this new and refreshing method of viewing a property has been a very popular alternative, with a very positive outcome.

To learn more about our collaboration and how you can view the properties virtually please don't hesitate to contact us, one of our team members will be happy to help.